This blog entry describes some aspects that help us to work on multiple projects at once. 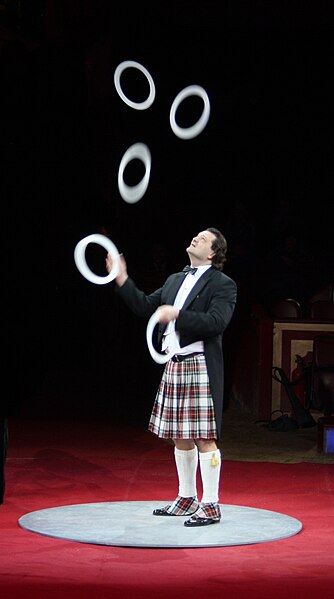 In this blog post, I will shine some light on a feature of our company that is often met with disbelief: How five developers can work on twenty projects at once without being stressed. I try to use the metaphor of a juggler, though I know nothing about juggling other than it can be done. I cannot hold more than one object in the air at any given time and even that is an optimistic estimate. But I’ve seen jugglers keep six to eight objects flying with seemingly no effort. We do this with software development projects.

A layman theory of juggling

A good metaphor can be applied from start to finish. I’ve probably chosen a bad metaphor, but it gives the right initial impression: Every developer at our company leads several projects at once. He (or she) keeps the projects alive and in the “green zone”, the ratio of remaining budget, time and scope (read: work left to be done) that promises little to no trouble in the foreseeable future.

In our case, we needed a lot of practice to reach our level of confidence. We lead development projects for up to 17 years now. Each developer finishes between four and seven projects per year. That’s up to a hundred projects to gain experience from. But we couldn’t drop (read: fail) a lot of projects, because it directly hurt our bottom line. Just imagine you want to learn how to juggle, but all you got are expensive ming vases that you bought from your own money, without insurance. That’s how it feels to “experiment” with projects. So we play it safe and only accept projects we know we can handle. And we watch our projects fly, very very closely. In fact, we have a dedicated position, the “project manager”, with the one duty to periodically ask a bunch of questions to assure that the project is still in the green zone.

Every object that you can juggle has its own characteristics of how it behaves once it is in the air. A good juggler can feel its trajectory and grab it in just the right moment before it would fall out of reach. The trick to keep a software development project in the green zone is the same: Get a hold on it before it ventures too far in an unfortunate direction, which is the natural tendency of all projects. The project lead has to periodically apply effort to keep the project afloat. But when is the right time to invest this effort? Spend it too soon and it has only minimal effect. Spend it too often and you’ll exhaust your power and your budget. But because every project has its own trajectory, too, and you can’t afford to let it slip, you should make the trajectory as visible as possible. You should draw it!

We’ve experimented with a lot of tools and visualizations. The one setup that works best for us is a low technology, high visibility approach. The project lead takes one half of a whiteboard and draws a classic burn-down chart or a variation (we often use a simple vertical progress bar). This chart is hand-drawn and rather crude, but big enough that everybody can see it. It is updated at least every time the project manager comes around to ask his or her questions. One of the questions actually is: “Is this chart up to date?”. The remaining budget of your project needs to be available at a glance, from across the hall. The project lead needs to “feel” this budget. And if it makes him or her nervous, it’s high time to determine the remaining scope and calendar time of the project once again.

In doing this positioning by triangulation on a regular schedule, the project lead draws the trajectory of the project for all three axes and can probably interpolate its future course. He can then apply effort to nudge (or yank, if things got worse fast) the project back on track.

Without the visibly drawn trajectory, your project lead is like a juggler in the dark, tossing unknown objects in the air and hoping that they’ll fall in place somehow.

As the complete noob to juggling that I am, I imagine that jugglers have a secret dress code like martial artists (watch their belts!), where other jugglers can read how many objects they can hold up at once. Something like buttons on the vest or the length of a scarf. So the beginning 3-objects juggler bows in awe to the master 12-juggler, who himself is star-struck by the mighty 18-juggler that happens to attend the same meet-up.

In our company, this “dress code” would be based on the number of projects you are leading. And just like with the jugglers, it is important that you know your current limit. There is no use in over-extending yourself, if you accidentally let one project slip, the impact is big enough that you’ll fail your other projects, too. Just like the juggler loses his or her rhythm, you’ll lose your “flow”.

The most important part of juggling many projects is that you always juggle one less than you are capable of. You need reaction time if one of them topples over. A good juggler can “rescue” the situation with subtle speedup or extra movements because the delay between necessary actions allows for it. A good project lead has emergency reserves to spend without compromising other projects.

There is nothing wrong to start with two projects and add more later on when you are more confident. But don’t start with only one. You can only form habits of resource sharing if you share from the beginning. Even I can pose as a competent 1-juggler, but the lowest bar to juggling has to be two objects.

Again, I know nothing about juggling. But from a mathematical viewpoint, juggling is “just” an exercise in timeboxing. If you have four objects in the air, in an arc that requires one second to go around, you’ll be able to spend a quarter second (250 ms) of attention to each object on each rotation. The master 12-juggler from above can only afford 1/12th or 80 milliseconds for each object. If he takes longer for one object, the next one will suffer. If he has no time reserves, a jam will build up and ultimately break the routine.

So, as a project lead, you need to apply timeboxes on all of your projects. They don’t need to be of equal size, but small enough that you can multiplex between your projects fast and often enough. A time box is a fixed-size amount of time that you allot to a specific task. The juggler uses a time box to put the next falling object flying back up. In our lunch break, we allot 60 minutes to food, beverages and some amount of walking. And if the process of eating takes longer than usual (I’m a chronic slow-eater, I can’t help it)? Then I have to go back partially hungry because I’ll end my lunch break on time. That’s the most important characteristic of a time box: You either succeed “in time” or interrupt or even cancel the task. The juggler will drop the one iffy object instead of risking a complete breakdown of the arc. You need to let your problematic task go (for the moment) instead of spreading the problem onto your other projects, too.

We’ve found that the amount of “one workday” is the most natural and easiest to manage time box. So we try our best to partition our week in the granularity of days and not our days in the granularity of hours. One aspect that helps tremendously is to have different physical locations for different projects. So you can be physically present “in the project” or “too far away at the moment” from the project. You plan your work week in locations as much as you plan it in project time boxes. The correlation of workdays, locations and projects is so strong that it doesn’t even seem to be timeboxing or project multiplexing. You just happen to be in the right place to work on project X for today. This is how you can juggle up to five projects without having to compromise all that much (provided you have a five-day work week).

If you can’t physically relocate your work, at least try to have a fixed schedule for your projects, like the “project A monday” or the “project X friday”. This might also mean to postpone emerging issues with project X until next friday. You need to build up skills to negotiate these delays with your customers. If your customers can dictate your schedule, you’ll get torn to shreds in no time. It’s friday or no day for issues on project X – at least as a good start for heavy bargaining. But that’s a whole topic for another blog post. Please leave a comment if you are interested to hear more about it.

The “one workday” time box has a strong implication: Every little thing you do for a project takes one day. That doesn’t mean you should work for five minutes on project A, completing the task, and then stare into the air and twiddle your thumbs. It means that you should accumulate enough tasks for project A that you can spend the better half of the day on the known tasks and the remaining time on the unknown problems that arise on the way. In the evening, you should be able to finish your work for project A with a feeling of closure. You can put project A aside until next week (or whenever your next cycle is). You can concentrate on project B tomorrow and project C the next day. Both projects didn’t bother you today (well, perhaps a bit, but you only acknowledged some e-mails and deferred any real thoughts on it until you enter their timebox).

The feeling of closure at the end of a successful work day is the most important thing that keeps you composed. You’ve done your thinking for project A this week and will think of project B tomorrow. But now, you can rest.

This must be the feeling that the juggler experiences with each object that goes up again. It is out of sight and only needs attention after it has nearly completed its arc again. And now for the next object, one at a time…

One thought on “The project jugglers”