A praise of the most developer-friendly Java Swing layout manager to date: DesignGridLayout.

Layout Managers were an huge benefit for Java Swing. They enabled software developers to program layout rather than to “drag and drop” it with some proprietary GUI builder. That’s nothing against a good GUI builder, but against the “source code” that gets generated as a result of using it. But after some time of playing and working with the layout managers given by Swing itself, we concluded that they weren’t up to the task. Since then, we were constantly on the lookout for new and better ways to tackle the layouting task.

A history of layout managers

All these layout managers added value to our GUIs and are in use until today, albeit seldom.

Most of the time, your dialogs aren’t these super-fancy, highly dynamic full-page layouts every UI designer dreams about. If they are, pick one of the layout managers from the list and wade through the constraint setup. But let’s say you want to layout a rather plain dialog with some widgets, but you want to do it quick without sacrificing the looks. Here is a developer-friendly solution for this task: Use the DesignGridLayout manager.

If you are interested in the possibilities of the layout manager, you should read the usage introduction page of DesignGridLayout.

One big advantage of the fluent API when compared with the string based constraint definitions is the compiler and type system support. You can’t spell anything wrong and the code completion feature of your IDE guides you to the right method and parameter order. The other advantage is that you don’t need to mess with pixel sizes for spacing and such. It’s handled by the layout manager in the most comfortable manner.

And because an article about a layout manager isn’t of any worth without a picture, here’s one: 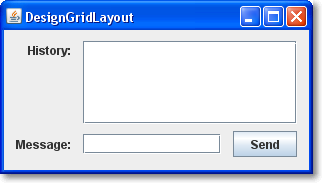 This is a frame with the panel we constructed in the example code above.