If you ever had the urge to switch off a rule in your static code analysis tool, this article tries to convince you not to do it. By accepting challenges presented by your tools, you become a better developer and clean up your code on the run. 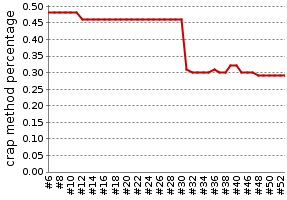 One of the first things we do when we join a team on a new (or existing) project is to set up a whole barrage of static code analysis tools, like Findbugs, Checkstyle or PMD for java (or any other for virtually every language around). Most of these tools spit out tremendous amounts of numbers and violated rules, totally overwhelming the team. But the amount of violations, (nearly) regardless how high it might be, is not the problem. It’s the trend of the violation curve that shows the problem and its solution. If 2000 findbugs violations didn’t kill your project yet, they most likely won’t do it in the future, too. But if for every week of development there are another 50 violations added to the codebase, it will become a major problem, sooner or later.

So the first step is always to gain visibility, no matter how painful the numbers are. After the initial shock, most teams accept the challenge and begin to resolve issues in their codebase as soon as they appear and slowly decrease the violation count by spending extra minutes with fixing old code. This is the most valuable phase of static code analysis tools: It enables developers to learn from their mistakes (or goofs) without being embarrassed by a colleague. The analysis tool acts like a very strict and nit-picking code review partner, revealing every flaw in the code. A developer that embraces the changes implied by static analysis tools will greatly accelerate his learning.

But then, after the euphoric initial challenges that improve the code without much hassle, there are some violations that seem hard, if not impossible to solve. The developer already sought out his journey to master the tool, he cannot turn around and just leave these violations in the code. Surely, the tool has flaws itself! The analysis brought up a false positive here! This isn’t faulty code at all, it’s just an overly pedantic algorithm without taste for style that doesn’t see the whole picture! Come to think about it, we have to turn off this rule!

When this stage is reached, the developers have a deep look into the tool’s configuration and adjust every nut and bolt to their immediate skill level. There’s nothing wrong with this approach if you want to stay on your skill level. But you’ll miss a chance to greatly improve your coding skills by allowing the ruleset to be harder than you can cope with now. Over time, you will come up with solutions you now thought are impossible. It’s like fitness training for your coding skills, you should raise the bar every now and then. Unlike fitness training, nobody gets hurt if the numbers of your code analysis show more violations than you can fix up right now. The violations are in the code, if you let them count or not.

Once, a fellow developer complained really loud about a specific rule in a code analysis tool. He was convinced that the rule was pointless and should be switched off. I asked about a specific example where this rule was violated in his code. When reviewing the code, I thought that applying the rule would improve the code’s internal structure (it was a rule dealing with collapsible conditional statements). In the discussion on how to implement the code block without violating the rule, the real problem showed up – my colleague couldn’t think about a solution to the challenge. So we proceeded to implement the code block in a dozen variations, each without breaking the rule. After the initial few attempts that I had to lead program for him, he suddenly came up with even more solutions. It was as if a switch snapped in his head, from “I’m unable to resolve this stupid rule” to “Hey, if we do it this way, we even can get rid of this local variable”.

Don’t trick yourself into thinking that just because your analysis tool doesn’t bring up these esoteric violations anymore after you switched off the rules, they are gone. They are still in your code, just hidden and without your awareness. Bear up against your analysis tool and fix every violation it brings you, one after the other. The tools aren’t there to annoy you, they want to help you stay clear of trouble by pointing out the flaws in a clear and precise manner. Once you meet the challenges the tool presents you with, your skill level will increase automatically. And as a side effect, your code becomes cleaner.

Even if every analysis tool approves your code as being clean, it can still be improved. You might have a look at Object Calisthenics or similar code training rulesets. They work the same way as the analysis tools, but without the automatic enforcement (yet). The goal is always cleaner code and higher skilled developers.