A review of the book “Java by Comparison” that gives any aspiring Java developer a solid understanding what good code looks and feels like.

I need to start this blog entry with a full disclosure: One of the authors of the book I’m writing about contacted me and asked if I could write a review. So I bought the book and read it. Other than that, this review is independent of the book and its authors.

Let me start this review with two types of books that I identified over the years: The first are “toilet books“, denoting books that can be read in small chunks that only need a few minutes each time. This makes it possible to read one chapter at each sitting and still grasp the whole thing.

The second type of books are prequel books, meaning that I wished the book would have been published before I read another book, because it paves the road to its sequel perfectly.

An example for a typical prequel book is “Apprenticeship Patterns” that sets out to help the “aspiring software craftsman” to reach the “journeyman” stage faster. It is a perfect preparation for the classic “The Pragmatic Programmer”, even indicated by its subtitle “From Journeyman to Master”. But the Pragmatic Programmer was published in 1999, whereas the “Apprenticeship Patterns” book wasn’t available until a decade later in 2009.

If you plan to read both books in 2019 (or onwards), read them in the prequel -> sequel order for maximized effect.

The book “The Pragmatic Programmer” was not only a groundbreaking work that affected my personal career like no other book since, it also spawned the “Pragmatic Bookshelf”, a publisher that gives authors all over the world the possibility to create software development books that try to convey practical knowledge. In software development, rapid change is inevitable, so books about practical knowledge and specific technologies have a half-life time measured in months, not years or even decades. Nevertheless, the Pragmatic Bookshelf has published at least half a dozen books that I consider timeless classics, like the challenging “Seven Languages in Seven Weeks” by Bruce A. Tate.

A prequel to Refactoring 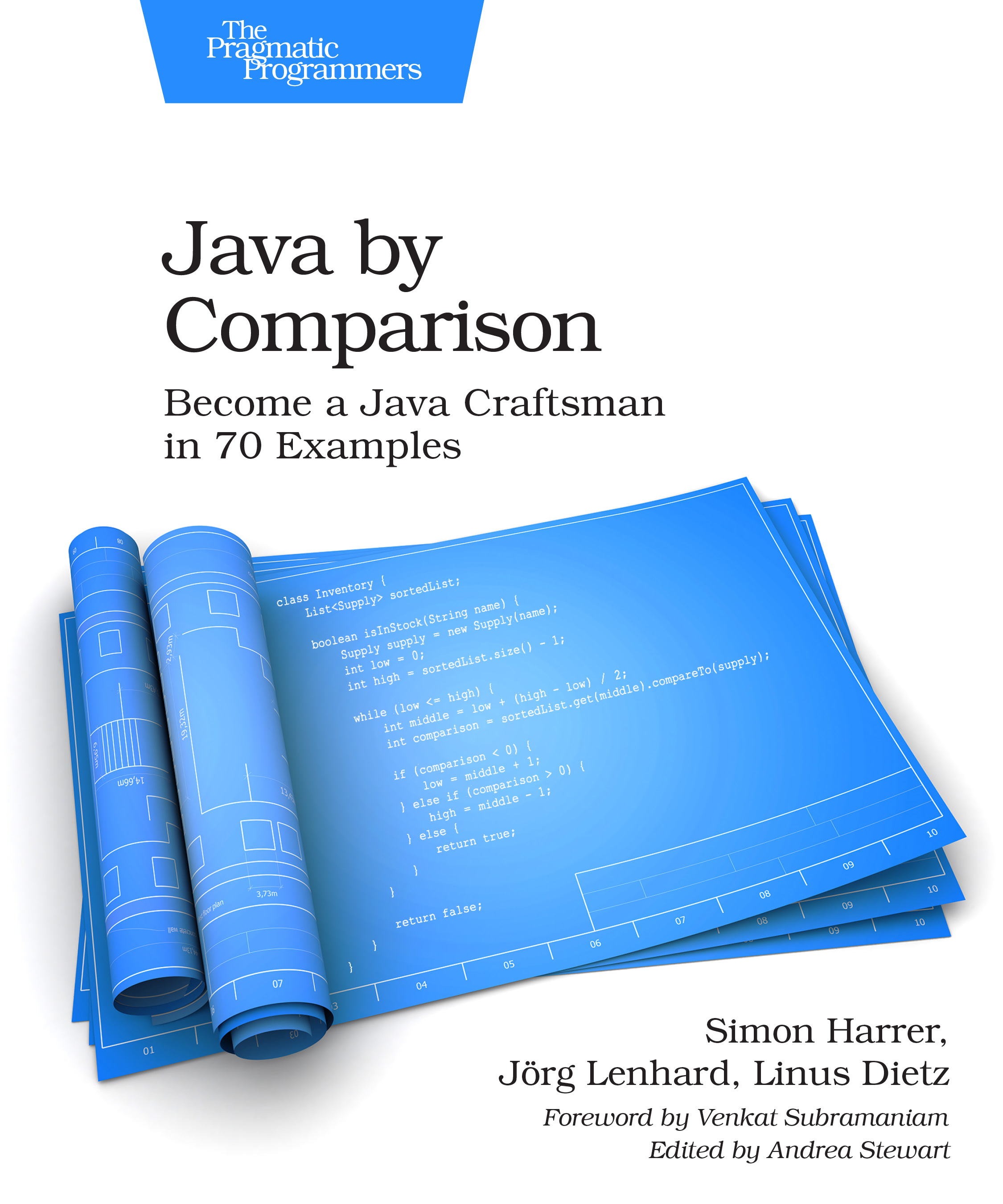 A more recent publication from the Pragmatic Bookshelf is “Java by Comparison” by Simon Harrer, Jörg Lenhard and Linus Dietz. When I first heard about the book (before the author contacted me), I was intrigued. I categorized it as a “toilet book” with lots of short, rather independent chapters (70 of them, in fact). It fits in this category, so if you search for a book suited for brief idle times like a short commute by tram or bus, put it on your list.

But when I read the book, it dawned on me that this is a perfect prequel book. Only that the sequel was published 20 years ago (yes, you’ve read this right). In 1999, the book “Refactoring” by Martin Fowler established an understanding of “better code” that holds true until today. There was never a second edition – well, until today! Last week, the second edition of “Refactoring” became available. It caters to a younger generation of developers and replaced all Java code with JavaScript.

But what if you are an aspiring Java developer today? Your first steps in the language will be as clumsy as mine were back in 1997. For me, the first “Refactoring” was perfectly timed, because I had eased out most of my quirks and got a kickstart “from journeyman to master” out of it. But what if you are still an apprentice in Java programming? Then you should read “Java by Comparison” as the prequel book to the original “Refactoring”.

The book works by showing you actual Java code and discussing the bad and ugly parts of it. Then it proposes a better solution in actual code – something many software development books omit as an easy exercise for the reader. You will see this pattern again and again: Java code with problems, a review of the code and a revised version of the same code. Each topic is condensed into two pages, making it a perfect 5-minute read (repeated 70 times).

If you read one chapter each morning on your commute to work and another one on your way back, you’ll be sped up from apprentice level to journeyman level in less than two months. And you can apply the knowledge from each chapter in your daily code right away. Imagine you spend your commute with a friendly mentor that shows you actual code (before and after) instead of only dropping wise man’s quotes that tell you what’s wrong but never show you a specific example of “right”.

All topics and chapters in the book are thorougly researched and carefully edited. You can feel that the authors explained each improvement over and over again to their students and you might notice the little hints for further reading. They start small and slow, but speed up and don’t shy away from harder and more complex topics later in the book. You’ll learn about tests, immutability, concurrency and naming (the best part of the book in my opinion) as well as using code and API comments to your advantage and how not to express conditional logic.

Overall, the book provides the solid groundworks for good code. I don’t necessarily agree with all tips and rules, but that is to be expected. It is a collection of guidelines and rules for beginners, and a very good one. Follow these guidelines until you know them by heart, they are the widely accepted common denominator of Java programming and rightfully so. You can reflect, adapt, improve and iterate based on your experience later on. But it is important to start that journey from the “green zone” and this book will show you this green zone in and out.

My younger self would have benefited greatly had this book been around in 1997. It covers the missing gap between your first steps and your first dance in code.

According to Robert C. Martin, the number of software developers worldwide doubles every five years. So my advice for the 20+ million beginners in the next five years out there is to read this book right before “Refactoring”. And reading “Refactoring” at least once is a pleasure you owe to yourself.