The best way to analyze a crash in an iOS app is if you can reproduce it directly in the iOS simulator in debug mode or on a local device connected to Xcode. Sometimes you have to analyze a crash that happened on a device that you do not have direct access to. Maybe the crash was discovered by a tester who is located in a remote place. In this case the tester must transfer the crash information to the developer and the developer has to import it in Xcode. The iOS and Xcode functionalities for this workflow are a bit hidden, so that the following step-by-step guide can help.

iOS stores crash dumps for every crash that occured. You can find them in the Settings app in the deeply nested menu hierarchy under Privacy -> Analytics -> Analytics Data.

There you can select the crash dump. If you tap on a crash dump you can see its contents in a JSON format. You can select this text and send it to the developer. Unfortunately there is no “Select all” option, you have to select it manually. It can be quite long because it contains the stack traces of all the threads of the app.

Importing the crash dump in Xcode

To import the crash dump in Xcode you must save it first in a file with the file name extension “.crash”. Then you open the Devices dialog in Xcode via the Window menu:

To import the crash dump you must have at least one device connected to your Mac, otherwise you will find that you can’t proceed to the next step. It can be any iOS device. Select the device to open the device information panel: 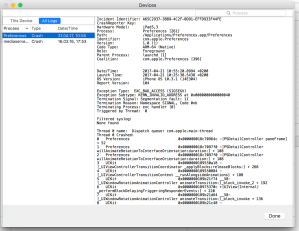 To import the crash dump into this dialog select the “All Logs” tab and drag & drop the “.crash” file into the panel on the left in the dialog.

Initially the stack traces in the crash dump only contain memory addresses as hexadecimal numbers. To resolve these addresses to human readable symbols of the code you have to “re-symbolicate” the log. This functionality is hidden in the context menu of the crash dump: 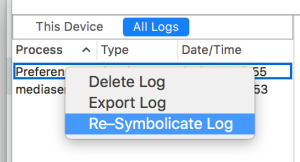 Now you’re good to go and you should finally be able to find the cause of the crash.