When two good ideas meet, there’s a chance for an even better idea to be born. This happened to us some time ago, when the ONOZ! Lamp came up.

On April 1st 2004, Alberto Savioa published a blog entry about an idea of two lava lamps (green and red) displaying the current build state of a project. I was somewhat distracted that day, marrying my wife, so the idea came to us two years later. Mike Clark wrote his wonderful book “Pragmatic Project Automation” and included not only the idea of the lava lamps, but also detailed construction guidance.

One day, an email contained a little animated gif with two panic guys running around.

Investigation suggests Jonn Wood as the author. We thought the guys act exactly like us after a broken build (one of the worst things that may happen here), so the gif and the word “ONOZ” were integrated into our company culture.

The birth of another idea

After we read about the lava lamps, we wanted to own them, too. But only after inspiration from the animated gif, we were sure about our specific realisation. We merged the two states into one lamp (on/off instead of green/red) and did without the lava. A normal desk light would do the job now.
We even have a good justification for the omission of the green (lava) lamp:

The last reason is a good one when you look at this simulation of colorblindness:
These are pictures of the original green and red lava lamps: 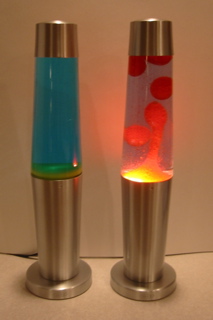 This is how it looks to a colorblind employee. These images were generated by Vischeck, a website trying to inform about colorblindness practically. 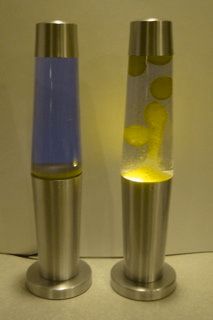 Not much of a difference. If you swap them around secretly, ten percent (the percentage of colorblinds in the male population) of your team will panic without reason.

With little investment, we build a system supervising the build state of all our projects. Every build process sends its result to a server that checks for failures. If a build failed, the lamp gets switched on over traditional X10 signals. We can’t overlook the sudden burst of luminance, we panic a bit and try to fix the build. The lamp turns off when all projects are back to normal. 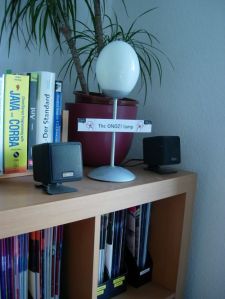 The ONOZ! Lamp is just a lamp standing around, until something ugly happens. Then it turns into a glowing infernal of failure. We nearly failed to give it a correctly spelled name, too. We named it “ONOEZ! Lamp” first, which seems to be the only invalid spelling of this exclamation.

The ONOZ! Lamp works great. Its mere presence has a comforting effect, as long as it is off. Which is the case most of the time. When it fires, the effect is like an alarm stopping all work. And the operator giving the alarm is always alert and incorruptible: our continuous integration server.