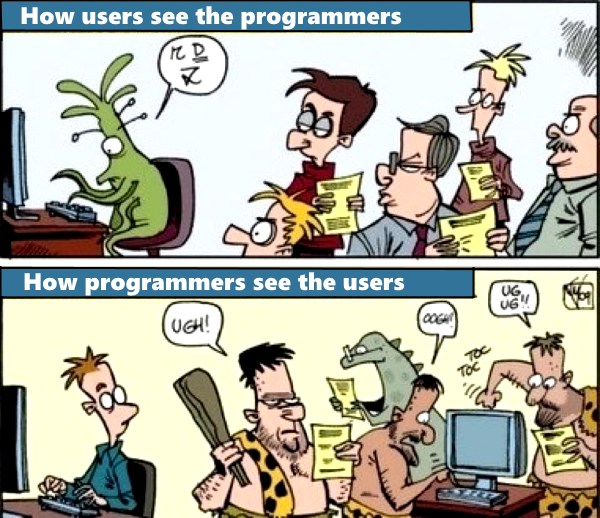 Because you can’t read elsewhere about the concept of Developer Experience, I want to give two more examples and show how it affects the User Experience. The first example is a big, long-lasting software system that is in production and still developed further. If you have a software system in production, everything requires an additional thought about the matching upgrade strategy. You can’t just modify the database structure, you need to provide migrations. You can’t just add a configuration entry, you need to make it optional or consider the least harmful default value. In the project of our example, the developers had three possible approaches to a new configuration entry:

You can probably guess which of the three options got used so excessively that users complained about the configuration being all over the place, in a myriad of little one-liner configuration files with ominous names. The developers chose the best option for them and, in short view, for the users. But on the long run, the User Experience declined.

The second example is from a computer game in the mid 2000s. It was a massive multiplayer online shooter with a decent implementation ahead of its time. But one thing was still from the last century: After each update of the game, the key bindings were reset to the default. And every other aspect of local modification to the settings, too. After each update, you had to configure your video, audio, controls and everything else like your in-game equipment again and again. The game didn’t offer any means to copy or reload your settings. It was up to you to maintain a recent backup of the settings files just in case. And if the file format was changed, you needed to combine their changes with yours. WinMerge is a decent tool for that task. But the problem is clear: The game developers couldn’t be bothered to think about how their upgrade strategy would affect their users. They ignored the problem and let the users figure it out. They chose better Developer Experience, free from complexities like user-side modifications over good User Experience like a game that can be upgraded without drawbacks for the gamers.

Sadly, this is an usual formula in software development: Developer Experience is more important than User Experience. Just look at it from an utilitarian point of view: If you burden thousands or even millions of users with just an easy one-minute task that you could fix during development, you have a budget of two workdays up to 10 person-years. Do the math yourself: One million users, each spending one minute of work on your software, equal to over 2000 workdays lost on a thing you could probably fix for everybody in an hour or two.

And this brings me to my central statement: Developer Experience, as opposed to User Experience, means nothing. It’s just not important. At least for all the users. It is important to the small group of developers and should not be forgotten. But never should a decision lead to better Developer Experience on the expense of User Experience. It’s a small inconvenience for us developers to think about smooth upgrades, meaningful and consistent control element titles or an easy installation. It’s a whole new game for our users.

Call to action: If you have another good example of developers being lazy on the expense of their users, please share it as a comment.

Call to action 2: The initial picture is linked from the excellent website badhtml.com. If you ever feel like an imposter for your latest design, go and visit this website.